By Alison Rector, FCA Board Member 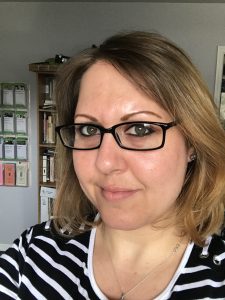 When you phone the FCA office in Burlington, Vermont, the friendly voice who answers your call is likely to be Nastassia Strackbein.  As an FCA board member, I’ve enjoyed getting to know Nastassia in our work together. And you probably have too.

I recently visited Josh and Nastassia in their offices, learned more about their work, and took some photos.

Nastassia has been working at FCA for over two years in her role with Consumer Assistance and Office Manager.  She’s an enthusiastic voice advocating for funeral consumers.  Nastassia just completed her first General Price List survey of Vermont funeral homes.  She’s also participated in gathering prices nationally as part of FCA’s work with Consumer Federation of America.

Nastassia enjoys speaking with the public about funeral consumer rights and smart consumer practices.  She explained that she talks to the bus drivers in Burlington about FCA ‘s mission on her ride to work, as well as all the people she interacts with in a day at the office.  Go Nastassia!

Other fun facts about Nastassia:  she’s an enthusiastic walker and hiker.  She knows how to hunt for mushrooms.   She likes to vacation in Maine when she can, preferably with her daughter.  Some of her family history is German; she spent part of her childhood in Germany.

You’ll get to meet Nastassia in person in Rochester, New York at the biennial conference June 21-24.   She’ll be there, and she’ll bring her friendly voice.  Nastassia says she’s looking forward to connecting the voices she meets on the phone with faces she’ll meet in person.

See you in June!